Application of Large-screen Display in Technical Modification Project of No.2 Unit in Luohe Power Plant

2019-04-12 12:03:00
I. INTRODUCTION With the rapid changes in power plant control technology, today's control room man-machine interface MMI has undergone a revolutionary change. Only one or two operators control a unit process system. The unit set control room cancels the BTG disk. The DCS man-machine interface is configured by 2-3 large-screen displays plus 4-5 CRTs. According to the operator's request, all the information can be immediately displayed on the screen. Provides a complete picture of the power plant. Optimized alarm handling and diagnostic concepts provide timely information to respond quickly to changes in plant status. Based on the above considerations, we have applied large-screen display technology to the No. 2 unit in Luohe Power Plant. î€ƒ

Second, large screen display (LargeScreenDisplay referred to as LSD) of the technical characteristics of the current large-screen display is mainly achieved through three technologies: First, DLP, and second, LCD, and third, CRT. CRT is the earliest projection system, but its inherent bulk and low brightness impede its further development. The LCD is a liquid crystal projector that uses light through a liquid crystal panel (LCD) imaging principle. The DLP (Digital Light Procession) projector is a new projection display method. It uses a digital micromirror device (DMD) as a light valve imaging device and uses a digital light processing technology (DLP) to modulate a video signal to drive a DMD light path system. The projection lens takes a large screen image. The projector has three major advantages:

î€„ (2) Due to the principle of light reflection imaging and DMD devices with high-density pixels, the light transmission rate (the ratio of the effective area of â€‹â€‹light passing through the total area) is more than 90%, which greatly improves the utilization efficiency of light while the contrast and Brightness uniformity is better.

î€„ (3) DMD can produce seamless high-quality images. As a DLP core technology, the DMD micro device is a highly integrated semiconductor optical switching device. It utilizes the principle of light reflection imaging. The driving circuit of each pixel is on the back side, and it does not block the light path. The distance between the pixels is extremely small, only 1 Î¼m, and the area of â€‹â€‹a single pixel is 16Ã—16 Î¼m. Therefore, the pixel density is high, and the reproduced picture has no sense of pixels.

The factory-wide display on the big screen is easy to modify, and the mosaic-style overview is usually fixed.

The large-screen display can be used in a variety of information media, and provides a dynamic, integrated information that creates an "office" working atmosphere in the unit control room.

The large-screen display incorporates industrial TV into the display range, and can completely eliminate the BTG disk and appropriately reduce the number of CRTs of the DCS. 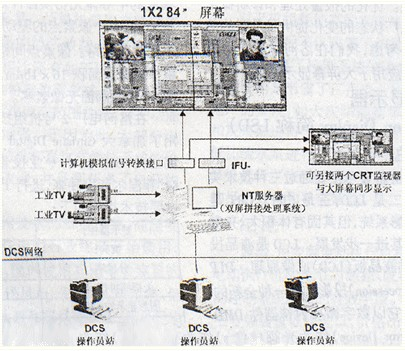 V. System Description î€„ Large screen projection system As the display terminal of the DCS system operator station, it has the same monitoring function as the operator station display. The content displayed on the large screen is realized through the DCS system configuration, including the sound and light alarms and light-cards that need to be implemented. High-resolution computer graphics, text messages and other signals are input to the analog signal conversion interface IFU-103 through the high-quality signal transmission cable. One output of the IFU-103 is connected to the projector, and the other output is returned to the monitor of the workstation to achieve simultaneous display. The projector projects images onto the screen separately, producing high-brightness, high-definition images. In this project, a dual screen splicing control system is an operator station on the DCS network. There are two display outputs on the splicing system. Two computer analog signal conversion interfaces IFU-103 are connected to the two projectors respectively. Machine, the industrial TV signal is connected to the video input of the splicing control system, and is digitally processed by the host and displayed on the large screen in the form of a computer application window. By arranging the MOVER control program installed on the control system, the arrangement and display position of the window can be defined.

î€„ The system is open. It can increase the switching equipment and send more signals to the big screen for high-brightness and high-resolution display. î€ƒ

6 Conclusions The results of large-screen display in unit control room of Unit 2 of Luoluo Power Plant are as follows: 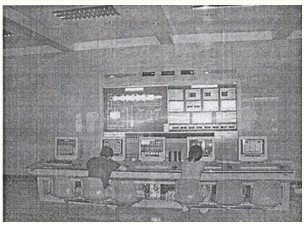 The R&SÂ®DLV1280DX projector reflects high brightness, high resolution and high reliability from the scene so far. It is suitable for continuous operation in the monitoring command center 24 hours a day, 7 days a week, and brings great convenience to the operation and debugging personnel. The application of large screen display in the technical upgrading project of Unit 2 of Luohe Power Plant was successful.