Washing is the use of hydraulic washing or additional mechanical scrubbing to separate the ore from the mud. Commonly used equipment includes washing sieves, cylinder washing machines and tank washing machines.

At present, re-election is only used to select manganese ore with simple structure and coarse grain size, which is especially suitable for manganese oxide ore with high density. Common methods include heavy medium dressing, jigging and shaker dressing.

At present, the process of treating manganese oxide ore in China is generally to crush the ore to 6~0mm or 10~0mm, then group, coarse-grade jigging, and fine-level shaker selection. Most of the equipment is a Haz-type reciprocating jig and a 6-S shaker.

Manganese mineral is a weak magnetic mineral [specifical magnetization coefficient X=10Ã—10-6ï½ž600Ã—10-6cm3/g], and it can be used in a strong magnetic field magnetic separator with magnetic field strength Ho=800ï½ž1600kA/m (10000ï½ž20000oe). When recovered, it can generally increase the manganese grade by 4% to 10%.

At present, the heavy-magnetic separation plants that have been newly built and reconstructed in China include Fujian Liancheng, Guangxi Longtou, Jingxi and Xialei. For example, Liancheng Manganese Mine Heavy-Magnetic Separation Plant mainly treats leaching manganese oxide ore, and uses AM-30 jig to treat 30~3mm washed ore, which can obtain high-quality manganese concentrate containing more than 40% manganese. After the removal of impurities, it can be used as a raw material for battery manganese powder. After jigging tailings and less than 3mm washing ore grinding to less than 1m, the selection of manganese ore concentrate should be increased by 24% to 25%, reaching 36% to 40%.

At present, only the Zunyi manganese ore is used in the strong magnetic-flotation process. The mine is a low-manganese, low-phosphorus, high-iron manganese ore mainly composed of manganese carbonate ore.

According to industrial tests, the grinding process uses rod mill-ball milling stage grinding, and the equipment scale is Ï†2100mmÃ—3000mm wet grinding machine. The strong magnetic selection adopts the shp-2000 type strong magnetic machine, and the flotation machine mainly uses the CHF type inflatable flotation machine. After years of production test, the performance is good, it is very suitable for Zunyi manganese ore dressing application. The strong magnetic-flotation process has been successfully tested and applied in production, which indicates that the deep selection of manganese ore in China has taken a big step forward.

The enrichment process of the fire method is simple, the production is stable, and the iron and phosphorus in the ore can be effectively separated to obtain manganese-rich, low-iron, low-phosphorus manganese-rich slag, and the manganese-rich slag generally contains Mn 35% to 45%. Mn/Fe?12ï½ž38, P/Mn<0.002, is a high-quality manganese-based alloy raw material, and it is also an artificial rich ore that is difficult to achieve the above three indexes at the same time. Therefore, the enrichment of fire method is a promising method for mineral processing in China for high-phosphorus high-iron and low-manganese refractory ore.

There are many chemical beneficiations of manganese. A lot of research work has been carried out in China, among which there are many experiments, and the development prospects are: dithionate method, manganese ore method and bacterial immersion method. It has not yet been put into industrial production.

Performance characteristics of steel wire welding machine: the length of warp and weft wire of tunnel support network welding machine are pre-cut by straight cutting machine. The warp is manually placed to the feeding mechanism and automatically entered by the servo feeding trolley without manual placement.
The weft wire is manually placed into the discharging device by the turntable stripper and dropped by a single one.
The welding system adopts pulse triggered thyristor with 8-way voltage regulation, and 8-way output can be combined at will, so as to reduce the impact on power transformer and effectively improve efficiency.
The machine power system is divided into pneumatic type and mechanical type.
The whole machine adopts PLC centralized control. The touch screen is the external data input part. All parameters can be input by the touch screen. 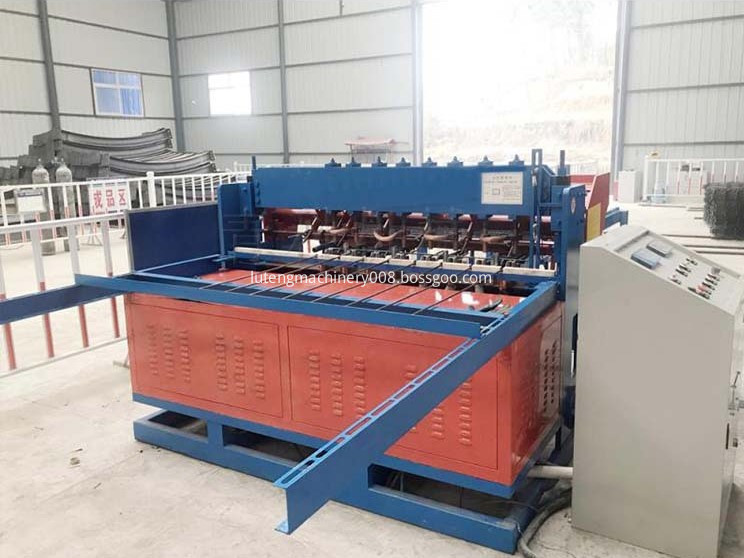